David Hockney is doing something very important for artists –combining the conceptual understanding of contemporary art today with the innate craftsmanship of applying paint onto a surface.

He is a modern man who doesn’t close his mind to new innovations.  He has that most important ingredient for an artist in any age, an open mind.  When a young man he became known for his photographic collages, large canvases which put together small standard photos but overlapping, adjacent and continuous to the previous image.  What these photo collages did was attempt to give a bigger picture than was possible with a single lens camera.  His paintings of sunny California bucked the trend away from the craft of painting and encapsulated something bigger and more interesting than the play of sun on swimming pool water.

He is still looking for the bigger picture, and, after a long and distinguished career, he comes to this project with a the vast amount of knowledge about the photographic image.  But he comes to it with something else, he personally observes the difference between looking through an image-catching single lens machine and looking directly through his two, independent eyes and he adds to that the skill to put down what the magic inside his head has translated and conveyed to his hands. 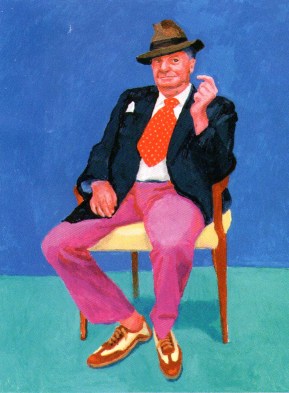 82 portraits and 1 still life, Hockney’s ambitious new hang at The Royal Academy is so much more than just a collection of people painted in front of uniform backings in a maximum of three days in the artist’s studio in Los Angeles.  This collection of paintings is not only a view into the way we see the difference between individual sitters but also “reaffirms the significance of the painted portrait in an age when selfies and photo-portraits have proliferated in social media.”[1]

For me this exhibition is a very poignant and personal archive which when installed in near-chronological order – as it is, permits the viewer an insight into the psychology of the artist himself.  “Hockney was recovering from a very difficult series of events, including a minor stroke, and he did not paint for some time, which was unusual for him.”[2]  When you walk around the gallery space and take time to observe the format and execution of these paintings you can almost see as a tangible thing, Hockney’s emotional state of mind lighten as we follow his confidence and conviction in the format and medium grow. 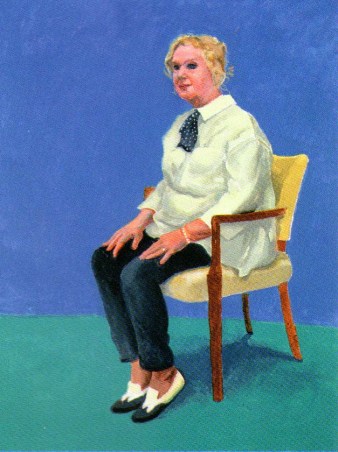 As I came away from the gallery and walked along Piccadilly it seemed that my own perceptive abilities had been heightened by an artist who had taught me a lesson in how to really observe people. The tourists, locals and business-people I passed now appeared more interesting; so much that I could almost see them with a blue wall behind them and a green carpet beneath them sitting on a chair and revealed in all their complexities.

This is what I consider a successful visit to a gallery. 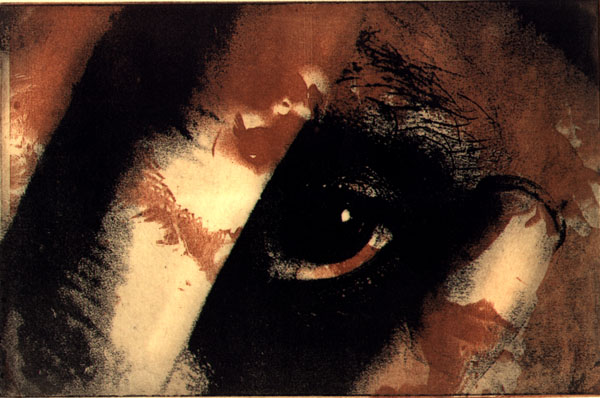 The visible has been and still remains the principle human source of information about the world.  When we can see we can orientate ourselves.  Even perceptions coming from other senses are often translated into visual terms, when we say “I see” we really mean “I understand”, and the sensation of vertigo originates in the ear but is experienced as a visual spatial confusion.

Thanks to the visible we recognise space as the precondition for physical existence.  The visible brings the world to us.  But at the same time it reminds us ceaselessly that it is a world in which we risk to be lost.  The visible with its space also takes the world away from us.  Nothing is more two-faced.

The visible implies an eye, it is the stuff of the relation between seen and seer.  Yet the seer, when human, is conscious of what the eye cannot and will never see because of time and distance.  The visible both includes us because we can see and excludes us because we cannot be everywhere.  The visible consists of the seen which, even when it is threatening, confirms our existence, and of the unseen which defies that existence.  The desire to see something like the sun setting behind the horizon, the stars on a clear night or heat haze in the dessert,  has a deep ontological basis.

To this human ambiguity of the visible one then has to add the visual experience of absence, whereby we no longer see what we saw.  We face a disappearance.  And a struggle ensues to prevent what has disappeared, what has become invisible, falling into the negation of the unseen, defying our existence.  Thus, the visible produces faith in the reality of the invisible and provokes the development of an inner eye which retains and assembles and arranges, as if in an interior, as if what has been seen may be forever partly protected against an ambush of space, which is absence.

Both life itself and the visible owe their existence to light.  Neither the optical explanation of visual perception nor the evolutionist theory of the slow, hazardous development of the eye in response to the stimulus of light dissolve the enigma that at a certain moment appearances were revealed as appearances.

Theories and observations of visual perception have been the main source of inspiration for computer vision (also called machine vision, or computational vision). Special hardware structures and software algorithms provide machines with the capability to interpret the images coming from a camera or a sensor. Artificial Visual Perception has long been used in the computer industry and is now entering the domains of automotive and robotics.